Brown Geeks are the community driving Avaaz Media, a media and production company dedicated to creating products and content with stories rooted in Asian mythology.

That is what we do.

Who we are is in our name. Avaaz means “voice.” This platform gives voice to Brown Geeks.

Brown Geeks are surfacing stories and voices buried too long, as ancient cultures are bucketed as “diverse” and billions of people are marketed to, outsourced for their talent, but not heard from.

Brown Geeks are industry professionals who want to break the cycle of the same few getting green lights to execute ideas.

Brown Geeks are media professionals who believe inclusivity expands the imagination, society, and ourselves.

Brown Geeks are geeks redefining “that guy” in gaming chat rooms and the hyper-aggressive toxicity infiltrating spaces we want to just chill in.

Most of all, Brown Geeks are passionate content creators who no longer want genres with unlimited worlds to be limited by gatekeepers.

Who are Brown Geeks?

Any definition of geek is laced with negativity.

For too long, geeks have been thought of as societal outcasts.

WHEN GEEKS ARE ANYTHING BUT…

Geeks have an insatiable curiosity for how things work and why things are the way they are. “Geeking out” is delving deep into a body of knowledge. It’s how you relate to the world.

Geeks don’t live their life in the middle, they go for whatever they want. They are passionate about their lifestyle and what excites them: AI, model airplanes, mythology, D&D, clodbusters and frogs for RCs, Monty Python, astrophysics, Star Trek, comics, Casio’s Databank calculator watch, makeup for cosplay. With no apologies.

Brown Geeks are geeks who want to dive deeper into anything geeks do except the genesis of the product or stories is east of Italy (South and Southeast Asian, Muslim, Persian, Filipino, and more) and bring to the surface anything too long considered “alt-mainstream” topics.

Go ahead and bite the head of the snake.

Amisha has a professional road full of detours as a professional dancer from Alvin Ailey, a religion major from Columbia with monk training in Asia, and advertising on campaigns as varied as Dove and national outreach on HIV. She is an award winning film and TV writer, producer, and playwright with stints in tech as a B2B content and UX strategist.

Ryan is not Lord Voldemort even though they share a name. He hasn’t even read Harry Potter or watched a single movie. He’s more of a starships and space travel kind of guy. As a Trekkie and proud Filipino-American, he is our starship commander leading a fleet of writers and content creators at Avaaz. He’s also an award-winning writer and journalist with a pilot currently in development.

You can read more about his adventures at ryanthomasriddle.com.

As a devout reader of fantasy novels, Brianna has always felt the call to put pen to paper and will be embarking on her greatest adventure yet — releasing her debut novel, City of Reckoning in 2021. When she’s not writing, she can be found behind the camera directing films or behind the computer screen working on multimedia design projects. Brianna’s path has led her to contribute digital illustrations to SBA.gov and motion graphics for a multitude of nonprofits, and freelancing while traveling the world.

Follow along to see what’s next on her journey at briannadasilva.blog.

Lohanne is a professional Southern California fangirl who balances life as an event producer and moonlights as a podcaster. A fangirl for DC and Marvel — yes, they do exist — as well as Harry Potter, Star Wars, Stranger Things, Buffy the Vampire Slayer and many more that won’t fit in this space that was allotted. If she’s not putting together a filmmaking seminar for a non-profit, then she’s probably hosting The NerdMix, a podcast about her pop culture obsessions. At the end of the day, she loves a good story.

As a queer South Asian writer, director and producer, Sim has always had an affinity to create stories that are beautifully diverse. Constantly on the hunt to find the best tools to aid in her quest, she believes media can be used to tell a story.

Through her experience working in development and production at Super Deluxe, Cartoon Network and Netflix, she has discovered animation to be the definitive tool to accomplish this task. She hopes to make the world’s stories come alive through the world of animation. 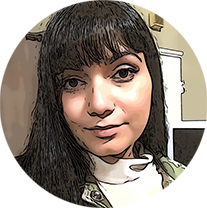 In a faraway valley nestled in the metropolitan desertscape of Los Angeles, you’ll find Tamara Syed. A 20-something anime connoisseur who can’t decide what to watch next. A former music journalist and photographer, she’s a sucker for a killer soundtrack.

Since her days of loitering in roleplaying message boards on Neopets, she’s had a knack for storytelling. If she doesn’t have a pen in her hand, it’s probably a microphone in a dusty corner of the city sharing jokes with a despondent audience. Follow along for clever takes on the world of anime and recommendations for the best games to download on your phone.

Miranda is an Indo-Guyanese writer, director, theatrical performance artist, and storyteller who combines art and activism to increase representation and visibility for the Indo-Caribbean and Indentured Indian diasporas. An avid brown geek, she originated the cosplay character “Bollywood Bev” in homage to Star Trek’s Dr. Beverly Crusher and as a personal endeavour to advocate for inclusion and representation in the Trek franchise and other media. Miranda is also passionate about mental health and hopes to help destigmatize it in brown communities through her work.


You can learn more about Miranda at mirandarachel.com.

Devika did not choose the fandom life, the fandom life chose her. She’s a pop culture aficionado with a head for useless trivia. After working in hard news for India’s biggest media house, she decided to follow her heart and unleash the geek within. Passionate about Japanese anime and manga, she hopes to throw light and start conversations about this subculture through her writing.