The sad-faced old woman, her eyes red from tears, takes off her skin, placing it in a calabash, and then the bloody flayed horror shrinks into a floating ball of fire. 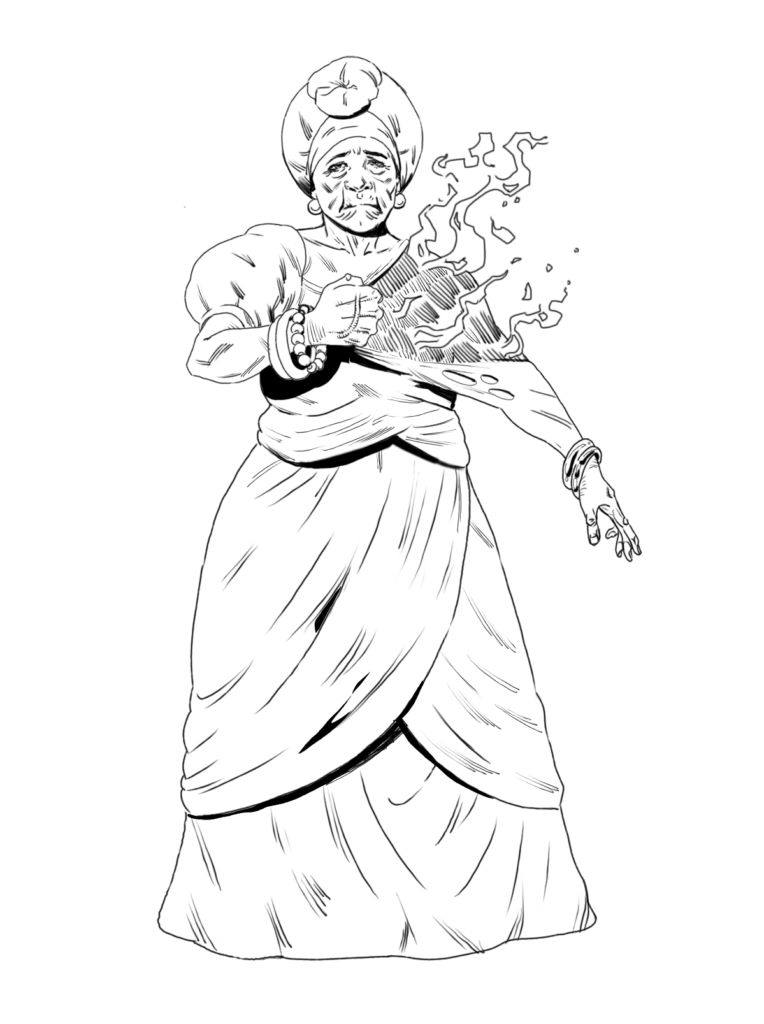 Anger, Bargaining, Depression Sometimes an old woman who has outlived everyone she ever loved — her husband, her children, her friends and relatives, wishes to bargain with Death. Sometimes Death accepts the bargain and she becomes the undead hag known as the soucriant.

The Flayed Woman The soucriant can take off her skin, revealing a flayed woman who then catches fire with a flame that does not consume her. She stores the skin in a calabash till she wishes to don it again.

Floating Fireball Once in her flayed flaming form, the soucriant can take the form of a small fireball and fly through the air. In this form she is able to slip through keyholes and also enter the realm of the dead to visit her lost loved ones.

The Reddest Eyes The soucriant’s eyes are always red from tears, of anger, grief, and flame.

Allergy to Iron The soucriant, when slipping through the lock of a door, can be killed by an iron key turned in the lock while she does. All that will be left will be a pile of bones on the floor outside.

Hot Pepper A soucriant’s skin, when it’s off, cannot be destroyed, but if the inside is coated in hot pepper, she will burn up when she puts it back on. Pepper will also burn the soucriant in her flayed form.

A Hunger for Flesh A soucriant does not have to eat every night, but when she does, she feasts, usually on someone who has been cruel to her in her mortal life. In her flayed form, she has sharp teeth and cruel bony claws.

Flaming Form. As an Action, the soucriant can peel off its skin and put it in its calabash. When it does so, its bloody flesh ignites with flame, burning any who touch it, but leaving it unharmed. A creature that touches the soucriant in this form or hits it with a melee attack while within 5 feet of it takes 7 (2d6) fire damage.

Floating Fireball. Once in its flayed flaming form, the soucriant can take the form of a small fireball and fly through the air. As an Action, the flaming soucriant transforms into a Tiny orb of fire with the brightness of a torch and a flying speed equal to its walking speed. As in its flaming form, it is protected by unholy fire. A creature that touches the soucriant or hits it with a melee attack while within 5 feet of it takes 7 (2d6) fire damage. If the soucriant passes through a keyhole in this form and an iron key is entered on the opposite side and turned, the soucriant dies.

Hot Pepper Vulnerability. If someone uses an Action to apply some directly to its flayed body, or if the soucriant dons her flayed skin after someone has coated it with hot pepper, the soucriant is Poisoned until she spends an Action doffing her skin or scraping off the hot pepper.

Innate Spellcasting. The soucriant’s innate spellcasting ability is Charisma (spell save DC 14).  It can innately cast the following spells, requiring no material components:

At will: produce flame

Turn Resistance. The soucriant has advantage on saving throws against any effect that turns undead.

Book of Beasts folklore Main2 Monster of the Week