The hustle and bustle of Trinidad and Tobago’s Underworld was nothing out of the ordinary for Marie as she sat at her work station and scrutinized the multiple screens that brightened the slate-colored walls in her small office. At every hour of the day in the vibrant Caribbean country, domestic violence cases against women – accompanied by public and private footage for the Underworld records – poured into their department left, right, and center. From San Fernando, Port of Spain, and Arima to Siparia, Penal, and Fyzabad, names were categorized from each city, town, and village, added to Monsieur Diablesse’s “hit list” and every full moon, assigned to her colleagues.

Marie had only met Monsieur Diablesse last year and after selling her soul to him for a small fee of revenge on the man who left her for dead (literally), he employed her full-time in the Underworld. She’d also seen and heard about the magic that her colleagues – though the women on Earth despised them – worked that left drunken men enchanted and disoriented and tonight, on her first death anniversary, Marie was keen on proving her competency to Monsieur Diablesse and earning her rank amongst the best.

Her eyes were still glued to one of the screens when a knock came from the door and startled her. Her longtime childhood friend, Josephine, – she had only arrived four years ago because her husband doused her in gasoline and burned her alive – announced herself before entering.

“Marie, girl, what are you doing here?” she asked in her thick sing-song accent as she clutched a garment bag in her hand and shut the door behind her.

“What does it look like? I’m working, Joe.” Marie noted something down on her clipboard before directing her full attention to Josephine. “What are you doing here? I thought you had an assignment up…you know where,” Marie said, glancing at the ceiling.

Josephine smiled and placed the garment bag on Marie’s desk. “I do…but so do you.”

Marie’s eyebrows knitted as she watched Josephine unzip the bag to reveal a dress. “You serious?”

“Have you checked your email for the day?” Marie shook her head. “Well, check it! I’m sure Monsieur has assigned us both to Calcutta Settlement…being Couva girls and all.”

Pulling up a browser, Marie’s fingertips danced across the keyboard as she logged in with her credentials. The moment she had longed for was sitting in her inbox – her first assignment. She opened the message from Monsieur Diablesse with the subject line “Madame Marie – Couva Fête” and read it to herself silently before her eyes met Josephine’s.

“I’ve been assigned to road two…near the playground.”

“I’ll be on road one near the ashram, so I’ll meet you at the playground once I’m finished. Get dressed. You’ve got some magic to work tonight.”

Marie’s smooth caramel-colored skin and long wavy black hair shimmered under the full moon that had broken through the dark blue clouds as she walked along the roadside towards the sports bar with one foot – the leg with her cloven hoof – in the strip of thick grass and the other – the leg with her human foot – on the concrete pavement for all to see. She was clad in a white long-sleeved, off the shoulder chiffon dress that curtained her legs and outlined her vivacious curves in all the right places. With part of her face hidden under her wide white brimmed hat, her eyes were a deep red – the same as the stain on her lips, the thin silk ribbon that encircled her waist, and the pair of high heels secured in one of her hands. 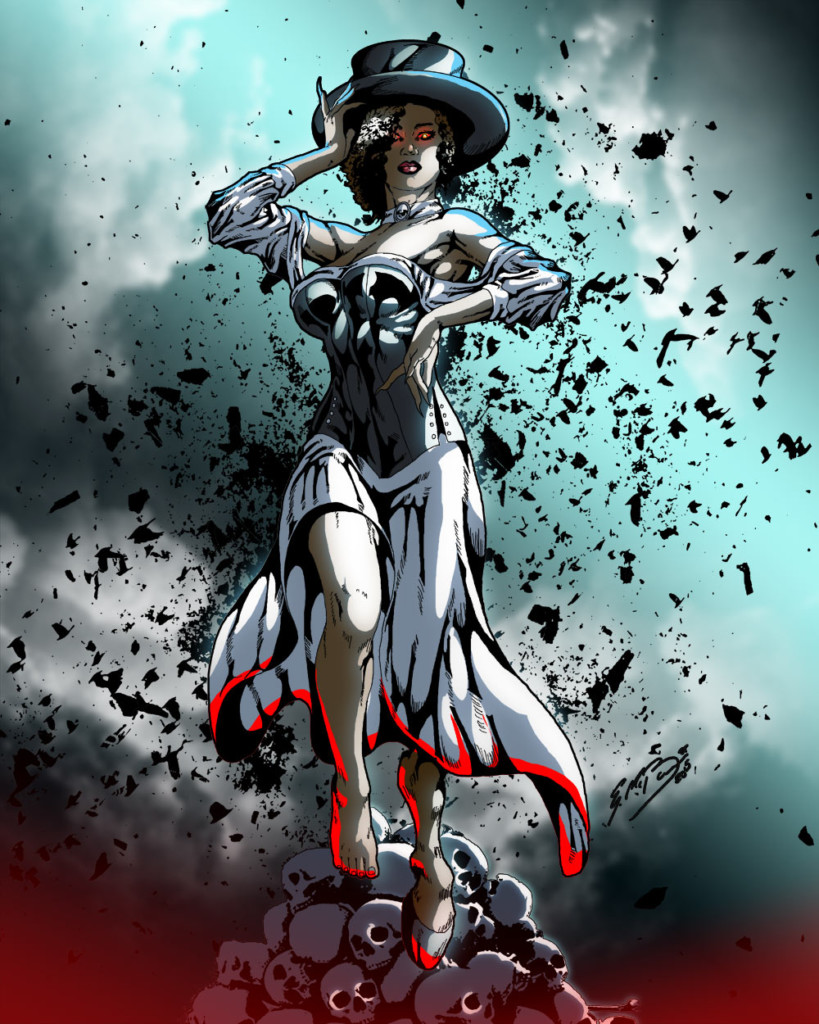 The sense of mischief in the breezy air as Marie neared the venue – her hips sashaying to the beat of a reggae tune – felt all too familiar; it was like she had never left Earth. She made a note of the crowd mingling outside – a mix of men and women in all shapes and shades of white, brown, and black – and where the grass strip ended, hoping the music would drown out the steady clopping of her hoof when it met the pavement. Before she knew it, her victim – a lean thirty-year-old man of Indian descent who worked at the nearby auto body shop with dreams of playing for the national cricket team – came stumbling out onto the roadside with his wrinkled shirt half unbuttoned and a bottle of Stag beer secured tightly in his hand.

No one seemed phased by his antics as this was the standard weekend (sometimes even weekday) performance of one who had way too many than what his or her body weight could handle. Marie knew it all too well having witnessed her boyfriend…ex-boyfriend…before he’d lash out at her. She did wonder, however, if this one knew he’d have to ease up on his drinking habits if he’d ever play professional cricket.

“Steven!” a brunette haired woman yelled from the bar entrance. She quickly maneuvered her way through the crowd, getting a grasp on his shirt. “Get back here now.”

So that was Steven’s outside woman, Marie thought as she recalled the details Monsieur Diablesse had sent. Steven would go off to meet her after he’d leave black and blue marks on his wife, Nikita, – as if a soucouyant had sucked the blood from her skin – whenever she’d accuse him of infidelity.

“Girl, whole night you harassing me. I going home,” Steven slurred, prying her hand off his shirt. Catching sight of Marie sauntering over to him, he straightened himself and smiled. “I ain’t ever see you ‘round these ends.”

She could feel sober and intoxicated gazes lingering on her – and her feet for affirmation – before the crowd dispersed with whispers of “La Diablesse come, go back inside,” “Watch how he straying behind she like a dog,” and “That Steven is a dead man.”

Marie’s voice was tender and tantalizing as she lightly tugged at his shirt collar. Steven’s breath hitched. The brunette screwed up her face. “I just moved here. Do you mind escorting me home?” she asked.

Steven nodded rather excitedly as if this was the action he’d been waiting for all night. “Of course, of course…wouldn’t want you traveling this late by yourself,” he said. He took a swig of his beer while the brunette cursed him under her breath and disappeared back inside the bar.

Marie released his collar in satisfaction and with one swift movement, she resumed strolling down the roadside with Steven now trailing behind her. She could feel his eyes hooked on her figure as she hummed a tune and he mumbled nonsense. She didn’t expect her first trial to be this easy…not that she was complaining. Josephine had told her that things could go either way. What if he didn’t comply or that outside woman of his interfered or…

“I ain’t get your name,” he said, pulling her out of her thoughts.

Marie kept her eyes straight ahead and chuckled. “What’s the point of formalities, Steven? You’re just escorting me home for the night.”

“You really asking me with a voice and body like that? Girl, I’ll ‘escort’ you home every night.”

She was glad he couldn’t see her roll her eyes. He sounded like her ex-boyfriend and she wasn’t in the mood to award bonus points for pick-up lines. She was, however, ready to give him what he deserved. “It’s Marie. Madame Marie.”

As the sports bar tunes and conversations fizzled out, the rest of their walk was filled with Steven attempting to serenade her. Eventually nearing the playground route, the dimly lit road had become eerily desolate. The cars and chatter in the distance on the next road over didn’t worry Marie.

She turned around to see Steven staggering behind her. “Do you mind if we take a seat for a moment? My feet are hurting.”

Rather than answering her, Steven went straight for the bench, placed his bottle under it, and beckoned her to join him. She obeyed, planting herself right next to him and placing her high heels beside the beer bottle.

His rough fingers grazed her shoulder and the alcohol lingered from his breath. “Come let me massage them,” he said.

“I know what would be better,” she purred. Marie stood up and took a fistful of her chiffon dress in both of her hands before she threw her human leg on one side of Steven to straddle him. Keeping her cloven hoof out of sight, she then undid the thin silk ribbon from her waist and draped it around his neck.

“You’re such a tease,” Steven whispered with one hand latched onto her waist, the other reaching under her dress.

Marie playfully wrapped the ribbon around his neck and searched his face for a reaction as his hand traced her smooth skin until it made contact with her coarse animal hair. She felt him run his fingers over the end of her leg again for confirmation before he gingerly locked his eyes on her red ones. With a horrified look plastered on Steven’s face, Marie’s glowing eyes pierced into his, leaving him stunned. She erupted into laughter and tightly pulled the ends of the ribbon. Struggling for air, his body shook under hers.

Krystal M. Ramroop
Krystal M. Ramroop, better known as Krys, is an innovative American born Indo-Guyanese creative writer and aspiring professional film and television actress. A first-generation summa cum laude and Phi Beta Kappa graduate of the City University of New Yorks City College (CCNY), Krystals a music, film, and tea junkie at heart and hopes her curiosity and niche for cross-cultural writing will allow her to share her research and experiences and create a realm for readers to join her in. She also enjoys reading, watching cricket and soccer, singing and dancing to her favorite Caribbean and Indian tunes, and dabbling in photography. With upcoming releases in Brown Sugar Literary Magazine and three Caribbean anthologies, her writings have been featured in Promethean Literary Journal and online for her WordPress website, The Art of Storytelling, Akashic Books Flash Fiction Duppy Series, Brown Girl Magazine, and Avaaz Media.