A beautiful red-headed maiden, garbed in white, gaily waving a red scarf in one hand, an ashen-faced matron, with a grey hooded cloak, a red apron, a book, and a rake, or black-gowned crone wearing a red kerchief, bearing a broom. Rats frolic in her wake. 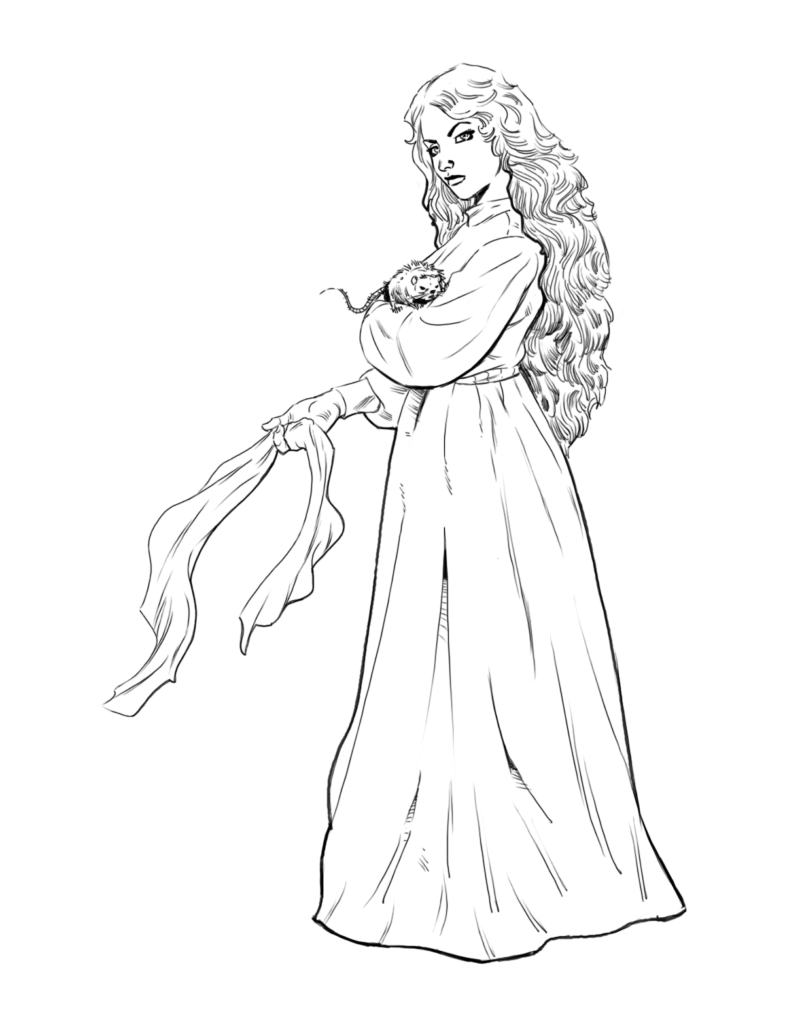 Maiden, Mother, Crone. Pestas appear in one of three aspects: maiden, mother, or crone.  They transform from one to the other on the basis of ancient, and often confusing, fey laws, not merely their wishes or whims.

Carefree Maiden. In her maiden form, a pesta appears as a lovely young woman in a white gown and displays the capriciousness of the plague, striking one person and sparing another, all as a matter of whim. A pesta, in her maiden form, may even be helpful, choosing to spare those she’s taken a liking to while afflicting their enemies. In this form, she bears a red handkerchief which she waves while dancing, and her plague is the lightest, killing only one in four.

Dutiful Mother. In her mother form, the pesta appears as an ashen-faced matron in a gray dress. Her scarf is now worn as an apron and she bears a book and a rake. The book bears both the names of those who will suffer the plague and those who will die of it. The pesta cannot alter either fate, but for those who aid her in her duties, she can assure them that their suffering will be short, and their death, if it is fated to happen, painless. Her rake symbolizes that she will kill half of any she encounters, while the others pass unharmed through the teeth of her rake.

Merciless Crone. In her crone form, the pesta appears as an ancient crone dressed in black, wearing her red kerchief as a headscarf and bearing a broom, symbolic of sweeping away all lives. The pesta no longer cares for the dictates of fate or random chance, for all will die of her plague short of magic or other miraculous means.

Yellow Finger of Death. A pesta may touch a victim with her yellow finger, subjecting them to all of the ravages of the plague in an instant. If they survive, she may touch them again and again.

Plague Rats. While most pestas like a personal touch, visiting every house in the village herself or actively passing certain ones by, some cities are simply too large and so she will have to send her rats to bear the plague.

Change Appearance. As an action, the pesta can transform into one of its three forms: maiden, mother, or crone. Its statistics remain the same in all forms.

Plague Bearer. Wherever the pesta goes, plague follows. When a pesta visits a village or town, there will be an outbreak of plague 24 hours later. If she appears in her maiden form, one-fourth of the population will be stricken. In her mother form, it will be half, and in her crone form, everyone is infected. Anyone infected is poisoned; while poisoned in this way, they take 4 (1d6) poison damage every hour. At the end of each hour, a plague victim can attempt a DC 14 Constitution saving throw. On a success, they are no longer poisoned.

Innate Spellcasting. The pesta’s innate spellcasting ability is Charisma (spell save DC 14). It can innately cast the following spells, requiring no material components:

At will: chill touch, spare the dying

Plague Touch. Melee Weapon Attack: +6 to hit, reach 5 ft., one target. Hit: 12 (3d6) poison damage and is poisoned until the end of their next turn.

Book of Beasts folklore Main2 Monster of the Week